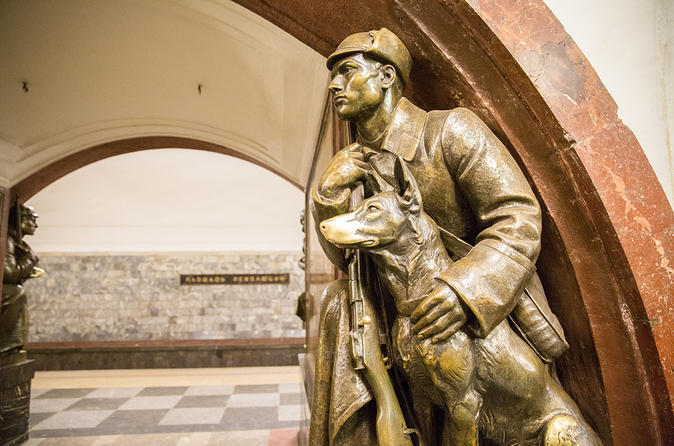 The beauty of Moscow’s underground is well known all over the world – made from the marble and granite each station is the grandiose monument itself, not only the member of the largest in the world underground system.

The beauty of Moscow’s underground is well-known all over the world – made from marble and granite each station is a grandiose monument itself, not only a member of the largest  underground system in the world.

The 2-hour Moscow late-night metro tour will let you see the architectural achievements of the Soviet Époque on the spot during late evening, when all those crowds of people are gone. When you are at Moscow underground, you will find out for yourself why it is called a live-museum or palace rather than a transportation system. Visiting all the different, beautiful metro stations on your way, you will also have a sneak peek at Stalin’s skyscrapers, the tallest buildings in Moscow from the times of USSR ordered by Stalin himself.

Tour starts at one of the Moscow metro stations that will let you enjoy the impressive interiors of the circle, blue, and green line stations, and see the walls covered with mosaics and frescos, under the light of enormous and beautifully-decorated lamps. You will learn about the construction of Moscow metro, the stages of its opening, and the reasons why it became a museum instead of just being a transportation system. It is also interesting to know about the role of Moscow metro during World War II and its present-day function.

At the very beginning of the tour, you will enjoy another great symbol of Soviet architecture,one of Stalin’s skyscrapers, the Ministry of Foreign Affairs. Your guide has endless stories and legends on Stalin’s sister skyscrapers, so with his help you will find out not only when and why were they built, but also who used to live there and why the eighth skyscraper was supposed to be built but never was.

This tour is meant to be fun and interactive. The guide skips useless information and focuses only on key facts and the most dramatic aspects of the Moscow metro history. Also, the unique opportunity to talk with locals and ask them questions to know how the current reality in Russia looks like is a great part of this tour.

The beauty of Moscow’s underground is well known all over the world – made from the marble and granite each station is the grandiose monument itself, not only the member of the largest in the world underground system.