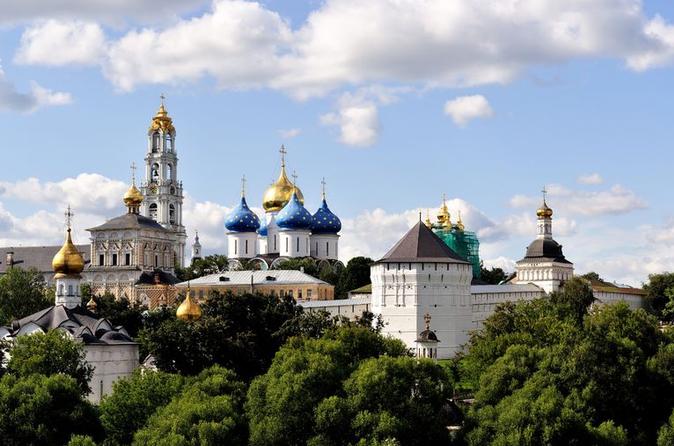 Enjoy this private trip and visit Sergiev Posad, and explore both the Holy Trinity Lavra and its frescoes by Andrey Rublev's; as well as a traditional Matryoshka factory.

Once you are picked up by your guide at your hotel in the morning, you will get on a comfortable coach for an approximately one-hour drive to Sergiev Posad (also known as Zagorsk), located in 73 km from Moscow.
On the way you can listen to your guide telling you the story of the town, which took its name from the region´s patron saint - the St Sergius of Radonezh, and is said to found its 14th-century Orthodox monastery, which re-opened as a museum after World War II.

Once there, you will visit the Unesco-protected Trinity Lavra Monastery of St Sergius, and admire its frescoes by Andrey Rublev on the ancient walls of Troitsky Cathedral, built in 1422 and part of the complex.

Afterwards, you will get a chance to visit the Museum-Reserve Abramtsevo, in the past frequently visited by figures like Polenov, Vasnetsov, Vrubel, or Nikolay Gogol, who used to read there excerpts from his "Dead Souls" masterpiece.

Then, you will be able to visit a "Matryoshka" factory, considered to be the oldest in the country, dating back to 1904.
Throughout the day, you will take breaks, including a buffet-lunch in the nearby restaurant, which offers Russian specialities such as Schchi (cabbage soup), Solyanka (sour soup), Blini, Pirozhki (baked stuffed buns), Olivier Salad, Pirogi (large pies), or a Mors (berry drink).
You will then be taken back to Moscow.

Enjoy this private trip and visit Sergiev Posad, and explore both the Holy Trinity Lavra and its frescoes by Andrey Rublev's; as well as a traditional Matryoshka factory.