Red Square and the Moscow Kremlin 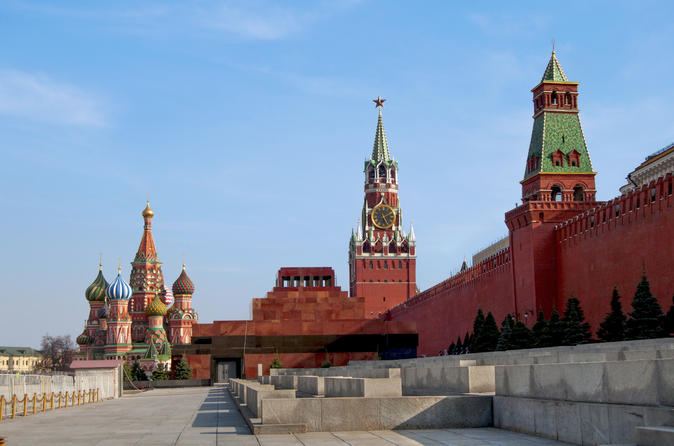 Your guide will be waiting for you in the lobby of your hotel and will take you with Moscow Metro to the Red Square. Next 3 hours you will spend listening to the stories and legends of Red Square rich in symbols of Russia's turbulent and intriguing past.

Red Square:
The square's name has nothing to do with communism or with the color of many of its buildings. In fact it derives from the word 'krasnyi', which once meant 'beautiful', and has only come to mean 'red' in contemporary Russian. Red Square began life as a slum, a shanty town of wooden huts clustered beneath the Kremlin walls that housed a collection of peddlers, criminals and drunks whose status left them outside the official boundaries of the medieval city.
The varied beauty of the architecture and the magical atmosphere belie the square's often brutal and bloody history, but the combination makes Red Square a truly fascinating place that you'll want to come back to again and again.
St.Basil’s Cathedral:
Every capital has a well-known landmark making it easily recognizable. In Moscow, the Cathedral of the Protecting Veil of the Mother of God, better known as the Cathedral of St. Vasily the Blessed (or St. Basil’s Cathedral, as it is often called in English), standing in Red Square is such a landmark. It is for nearly 450 years now that this architectural ensemble of inimitable beauty and grandeur has been filling our hearts with joy, excitement and pride.
Can you believe that the cathedral’s original color was said to be white to match the white stone of the Kremlin? Starting in the 17th century, the façade and domes began to be painted in the remarkable colors that are seen today, and the pigment is said to be taken from a Biblical description, in the Book of Revelation, of the Kingdom of Heaven…You will know much more amazing fact about history of the cathedral by the end of the tour.
The Moscow Kremlin:
Built as a fortress in the 12th century, the Kremlin is an official residence of the President of the Russian Federation and the President's office.
Your walking tour involves the extensive Kremlin grounds with the Cathedral Square as its focal point. Surrounding the square are masterpieces of Italian architects of the 15th century. Along the way, visit the Assumption Cathedral, once a private chapel of the tsars, to admire the beautiful frescoes and a striking iconostasis.

Your guide will be waiting for you in the lobby of your hotel and will take you with Moscow Metro to the Red Square. Next 3 hours you will spend listening to the stories and legends of Red Square rich in symbols of Russia's turbulent and intriguing past.