Trip to Vladimir and Suzdal from Moscow 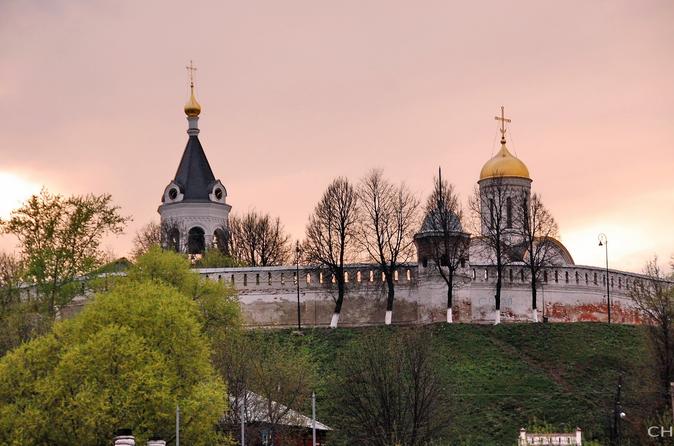 Dive into Russia’s past: visit two Golden Ring towns Suzdal and Vladimir in one day and feel the atmosphere of the Russian Middle Ages.

Start your journey along with your private guide in the early morning with a ride by a comfortable high-speed train to Vladimir where you will meet your driver to go to Suzdal. Visit an open-air museum of the wooden architecture and peasant life to learn about the Russian rural community. Head toward Suzdal Kremlin where the history of the town started in the 11th century. Walk to the Market Square and taste medovukha - a Russian traditional soft honey-based alcoholic beverage. Marvel at inexpugnable walls of St Euthymius Monastery which once was a prison for dissidents.

Drive to Vladimir - the capital of the Golden Ring and once the capital of Russia. The city was a cosmopolitan and artistic center at the end of the 12th century and the Seat of the Orthodox Church in the 14th century. Admire the shallow relief carvings on the white tall walls of St Demetrius cathedral that have been created by various artists. Your guide will explain to you the significance of the Assumption cathedral that was the main cathedral in Russia before Moscow became the capital of the country in the 15th century. Walk along Bolshaya Moskovskaya street - the main street of Vladimir that leads right to Moscow - to see the authentic architectural look of the city.

Finish your day at the foot of the Golden Gate - the only surviving gate out of 7 that protected ancient borders of the city from enemies. Head to the railway station to get back to Moscow by train.

Dive into Russia’s past: visit two Golden Ring towns Suzdal and Vladimir in one day and feel the atmosphere of the Russian Middle Ages.